TSUYOSHI SUZUKI is an internationally-acclaimed DJ and producer from Tokyo, Japan. At the leading edge of the psychedelic trance movement for more than a quarter of a century, TSUYOSHI continues to thrill crowds all over the world with his uniquely focused style of mixing and psychedelic music selection.

A former art department film student at Nippon University in the 1980s, TSUYOSHI's life turned to music when he was exposed to the evocative and futuristic DJ'ing of KUDO at the club Yellow in Nishi-Azabu, Tokyo in the early 1990s. Visiting India and immersing himself in the emerging Goa sound, TSUYOSHI formed the band Taiyo (which would later become Prana) with Nick Taylor, who had also been influenced by KUDO's music. TSUYOSHI moved to London in 1992 to found Matsuri Productions with marketing manager John Perloff and to expand his work as a DJ. Producing popular releases on his record label while DJ‘ing at the popular Return To The Source events in London, TSUYOSHI gained international popularity and was soon travelling across the globe, bringing his precisely-crafted energizing style of music to outdoor and indoor parties and festivals on every continent. TSUYOSHI’s influence extended into inspiring a collection of psychedelic clothing for the legendary Issey Miyake brand, designed by the collective Organix (who designed Matsuri’s labels), which involved TSUYOSHI DJing for fashion shows in Paris and Tokyo that featured the collection in 1997.

During ‘90s, TSUYOSHI in collaboration with various artists produced and released numerous tracks as Blissed (with Nick Taylor & Takehiro Tokuda), Legal Mission (with Ingo Schnorrenberg), Anti Matter (with Mark Dressler aka Dervasystem), Bass Chakra (with Ingo Schnorrenberg), Kailash (with Kristian Thinning Andersen aka Elysium), Mumble (with Sean Williams aka Process), Omputer (with Ofer Dikovsky aka Oforia & Ron Rothfield aka Raja Ram), and Slag (with Gus Till).

Prior to Matsuri Productions ceasing their activities in 1999, the label released a multitude of EPs and singles, since February 1995 issuing 14 artist albums, 11 compilations, and 3 mix CDs, including those of DJ TSUYOSHI.

In 2000 TSUYOSHI moved back to Tokyo and shifted focus to a wider range of electronic and analog musical styles with a new label, Mad Skippers, while also organizing the regular event Tokio Drome. He expanded from DJing into live music with his band Joujouka (with Hideyuki Mitsumoto, Minoru Tsunoda & Takeshi Isogai, who later left the band to focus in his own music). Joujouka produces cross-platform electro psychedelic rock and fusion music.

TSUYOSHI has been released also New Wave/Electro music under the alias Numanoid and formed the project GeKen, with the ever-popular Japanese producer Takeshi Isogai aka Ubar Tmar. The project is focused on updating psychedelic sounds with a 90s inspiration. In 2018 GoKen’'s debut EP released on HOMmega, while TSUYOSHI continues to take Matsuri Digital back to its roots with his compilations “Sympathy in Chaos 4” and “Forever Psychedelic 2” — refreshed and reinspired revisionings of psychedelic electronica.

As Matsuri Digital produces more releases of older tracks and newer productions, TSUYOSHI continues to be in demand as a DJ both at home in Japan and around the world. Over a quarter century after his exposure to electronic music, TSUYOSHI and Matsuri are continuing to evolve and shape the global scene.

Canadian DJ and classically-trained musician, CLONE604 (Gordon Brown), began his life-long love affair with electronica in 1993 in Ottawa, Canada, after being introduced by his older brother, Patrick. Immediately, he was enraptured by the hypnotic nature of trance and techno music—many songs of which he would later learn were earlier forms of what we call Goa Trance.

After attending his first rave on October 29, 1993, Gord knew that he wanted to become a DJ and weave his own interpretations of these hypnotic beats. His early focus was on trance, and surprisingly, Jungle! It was not until late 1995 that he discovered a tiny section in a local record shop, simply labeled, “Goa”. The section displayed only two 12” releases —Kris Kylven's "Odds EP" on Flying Rhino, and Joking Sphinx's “Courty Plane EP" on Matsuri. Suffice it to say, he's still falling down that rabbit hole as we speak.

In 1996 upon reading an article about the cloning of a sheep named Dolly and suggestions of how this discovery could someday be applied to humans, Gord adopted the name CLONE as his moniker.

Gord's first breakthrough as a DJ came in 1997 when he started regular appearances at Subsonic, held in the locally-legendary bar known as "The Well". Being only 17 at the time, he needed a fake ID in order to gain entry to even play! He would expand from there to play many local raves and events over the years.

In October of 1998, Gord's first true introduction to the psychedelic experience took place in Montreal, when, through a moment of synchronicity, he met Matthew Hilton (Dj Matt Boom! of Boom! Records)—a third-eye opening experience he had envisioned in a dream some years prior (ask him and he'll happily regale you in more detail!). Matt became a long-time friend and mentor (RIP).

CLONE was heavily involved with the early days of expanding Goa and Psychedelic Trance in his hometown through partnerships with The Celestial Intelligence Agency, One Tribe, and his own event production, Psycho Syndicate, and later the Freak Addiction Krew (F.A.K.), who he is still active with today throwing local events. He would play many events in Ottawa, Montreal, Quebec City, Toronto, and as far as Buf falo NY at the time. Since then he has played in Amsterdam at the well-known Boom! Records’ Cosmic Trip Ship alongside David Tingsgard of BotFB, and further forays into the USA to North Carolina and Pennsylvania.

In 2000, Gord put his classical music background to use and started writing electronic music under the name Taran Taphod (a variation of the celtic name for the secret language of bards), gaining valuable knowledge, programs and sample banks from his two production mentors, Ocelot, and Orion.

In 2005, Gord shifted to using CLONE for his unique brand of psychedelic trance, releasing through Geomagnetic, Kagdilla, and Ektoplazm from 2006 onwards, including his EP "Real Eyes", and the full-length album "Unleashed". (Links under bio).

Gord's true passions have always remained with the classic roots and history of Goa Trance, along with the modern iterations of that deeply psychedelic sound. He is a strong advocate of supporting artists through Bandcamp, and eschews pirating like the plague. While he maintains a solid repertoire of rare and unreleased Goa Trance, his focus on storytelling brings together a wide range of both released and unreleased material representing decades of artistry, never favouring one over the other as the psychedelic experience is always shifting and evolving. Through improvisation and technical prowess, CLONE plays the mixer like an instrument, blending psychedelic stories in unique and surprising ways—always following where the music leads.

His ever-growing passion for Goa Trance inevitably led to joining Cronomi Records as a label DJ and creative contributor in 2019, after meeting the Cronomi crew in Portugal at ZNA Gathering. This milestone has since led to writing release notes for Kris Kylven (UX, Syb Unity Nettwerk)—a dream come true since it was Kris 's "Flying + To The Sky" that changed Gord's life forever in that little record shop, back in 1995. 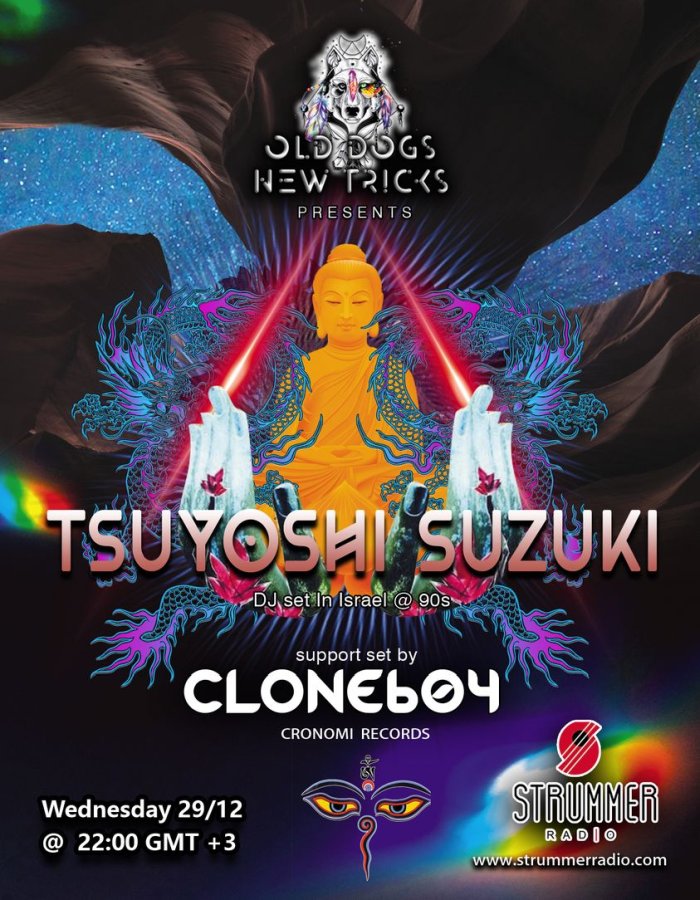