KOPFUSS RESONATOR is a funny name and the inspiration stems from a traditional African dish, a soup that consists of a sheep’s head (kopf) and feet (fuss). In the musical context it points out the very heart of Kopfuss Resonator: music that resonates through people enclosing mind and body.

It all started some day in 1994. It had definitely something to do with playing live at some underground event and falling deeply in love with the experience. Initially, the name was “Spect-R" and the project consisted of two people, Mark Pfurtscheller and Timothy Farber. With rising success came the increasing demand by DJ's to put tracks on vinyl. So mid 1995 the first 12” was released: "Spect-R - This Is Acid" followed by "True Freedom" (a co-production under the alias Highscore). Both releases breathed a new sense of freshness into the electronic dance scene, and put Spect-R definitively on the global techno and trance map, especially abroad in England, Israel and Goa. Which led to the first international booking in Tel Aviv, Israel. Which, in turn, was responsible for the launch of the final project name: Kopfuss Resonator.

More releases followed, and in 1997 Kopfuss Resonator globally and badly rocked the techno trance scene with “Whipbird". Consequently, in 1998, the first Kopfuss Resonator album was released with respect to the initial project name: “Spect-® Module”. The album was highly acknowledged by DJs in the international techno scene as well as by journalists.

It was the album that equipped Kopfuss Resonator with the final kick. They played all year long in Germany and abroad (e.g. New York/ USA) and were invited to perform as the only live act in the "XXL Ostermarsch", a 4-day rave marathon on a Frankfurt based radio & TV station that broadcasted live and had international reach via satellite and internet streaming. The invitation was repeated every year ever since then.

In 2002 Mark and Timmy parted and Mark continued working on new stuff for Kop fuss Resonator.

MARK has had a deep impact on the German music scene ever since the 80ies when he was part of the German "Neue Deutsche Welle" band "The Wirtschaftswunder" that ranked in the same league as bands like DAF, Einsturzende Neubauten, Palais Schaumburg. He also appeared as a guest artist with Holger Hiller and Die Krupps. This was an era that inspired most artists that nowadays DJ and produce electronic music, such as Sven Vath or Der Dritte Raum.

Switching to strictly electronic music in the late 80's, he started up various projects with different focuses. No matter what musical focus though Mark continued to set new standards in style and production. This is above all due to his open mindedness towards different music styles, his creativeness and great sense of composing that later on became the base for the sometimes unusual but always funky Kopfuss Resonator style.

HLIAS K. (from South Greece) doesn't call himself a DJ. He prefers the term “electronic music freak". He is a fanatic vinyl collector, co-founder of "Old Dogs" and radio producer with his own radio show on Strummer Radio, where he plays oldschool Goa Trance, Psychedelic Techno, Experimental Psychedelic Trance, early Suomisaundi/Spugedelic Trance and all kind of “Proto sounds". He is also a graphic designer (all our flyers are designed by him and lately he creates artwork for musical releases). 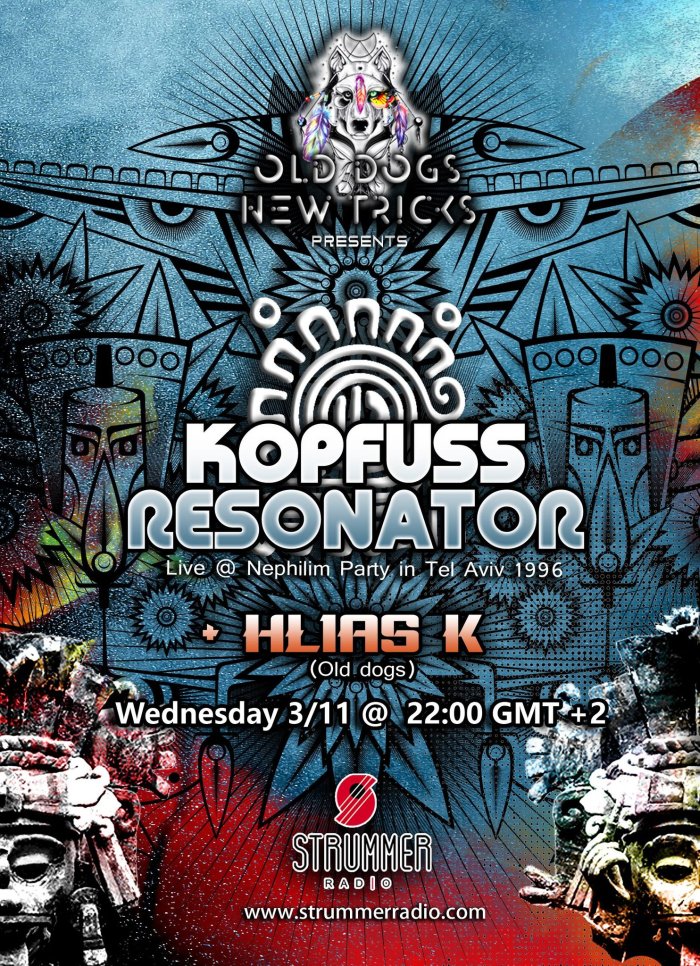