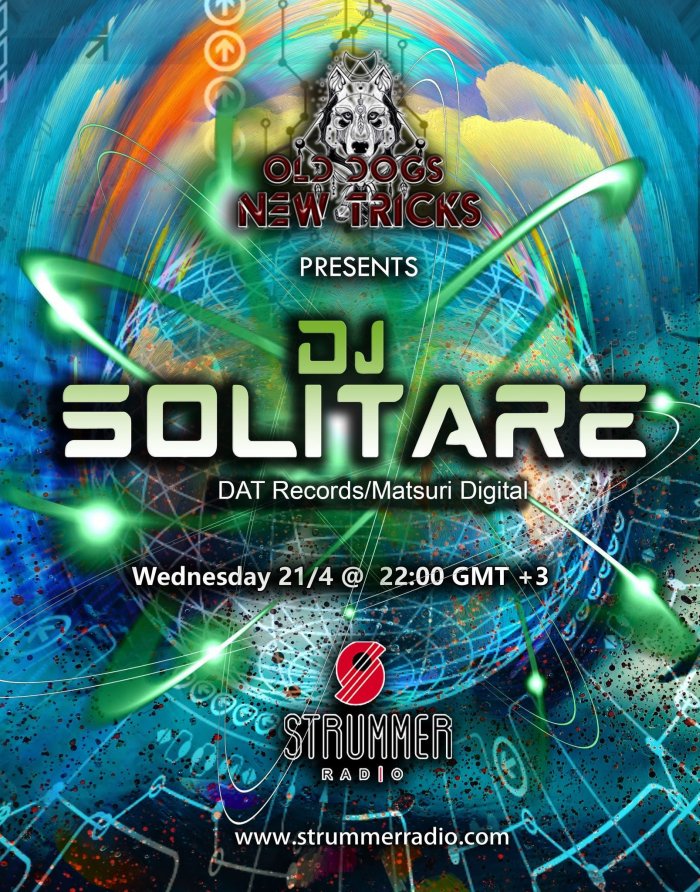 DJ Solitare about the mix

My first years of attending Goa-style parties in mid-90s Tokyo, where I first encountered this genre of electronic music, were formative influences of which many clear impressions remain.

From my first experience hearing Olli (Space Tribe) play all night in a club in October 1994 that made me think I’d walked through a portal to arrive on another planet, I was mystified by this sonic language and it took some time before I started to become familiar with different styles and their harmonic and melodic expressions. As someone who was classically trained and very active in that industry (I still am), I heard this music as the culmination of musical history but reaching back to us from the future and another plane of existence.

As I went to regular events with an array of local and international DJs, I began to notice different approaches to crafting storylines and also to how tracks were sonically blended. While DJs using vinyl tended to go for kick-matching (though not always), I was also quite taken by the more atmospheric transitions of tracks, particularly at outdoor events. I recall an amazing Equinox event in the Autumn of 1995 where Kuni played the whole night and the impression was that a cloud of quantum information would enter the dance floor in the middle of the forest and when it had communicated its message, another would come in and take its place as the old one left, and there was a moment to catch your breath and adjust to the new data entering the space. At times during these events, one had the impression that the music was not music, it was geometrical design and information that was communicating in sonic form. There wasn’t the sense that the DJ was a ‘DJ’ playing ‘music’: rather, the DJ booth was like a cosmic radio tower with an antenna tuned into outer space, picking up signals and transmitting them to those gathered in this tribal gathering.

Each time I play a set, the type of storyline and style of tracks are different, and my approach to transitions depends on track selection and how things line up, though there are general parameters that I always aim for. As a result of my classical training, my emphasis when mixing has been to try to connect more than just the kick but to find matching patterns between tracks and to blend those to create a thread of continuity beyond the percussive elements, at times with kick-matching and at other times not. Usually, it’s a combination of the two, but keeping the rhythm consistent and aiming to have one track ‘hand over’ the space to the next one in a less conventional sense, like multiple speakers reading different chapters from a book that one absorbs through the set.

As I tuned into the more hypnotic and nighttime storyline that emerged as this set evolved, I was drawn to more of that atmospheric cloud-like mixing style, where one track dances with the next along harmonic, rhythmic, and upper-register elements as opposed to the bass-level kick. As I listened with headphones, I was able to let go of the technical focus of the ‘mixing' of two ‘tracks’ and rekindle some of those early impressions of this music being more than just music but combinations of patterns gathered together and presented through sound waves, hearing things not in left-right, high-low mode but all-at-once, like voices coming both from the speakers and the centre of one’s head.

I believe that as we have gotten used to listening to this music at clubs and events over the years, many of us have adapted to a sense-based linear perception of what we’re hearing as opposed to a more embodied dimensional experience, and we can easily listen with a set of standards that can be mechanical rather than holistically musical. I know this has been the case for me, and listening at home can have its pitfalls, as you get used to hearing the music outside of the contextual space for which it was created, and on speakers whose size are inverse proportion to your body than what they would be at an event. But in the right outer and inner space, we can hear these sounds beyond the framework of the familiar and as an expression of something quite outside the ordinary.

All of us experienced some magic in our early years of attending these events - and sometimes since, too! - and it is my hope that these classic tracks in this storyline will enable some of those to be rekindled as they have for me.

Inspired by the now-legendary Odyssey and Equinox events in mid-90s Tokyo, and particularly by two events where Olli (Space Tribe) DJ’d all night, Mark moved to London in 1996 to become more involved with the scene. His regular contributions to Dream Creation Magazine at the time included in-depth interviews with Cydonia and Quirk, as well as explorations of the state of psychedelic trance music and for his reviews of international events.

Mark moved back to Tokyo in early 1998 after a quick visit to Vancouver, where a short set behind the Art Gallery at street level downtown on a Sunday afternoon introduced a number of local clubbers to psychedelic trance. He became a resident DJ at three regular parties in Tokyo and developed an underground following as DJ Solitare before moving to Vancouver late in 1999.

In the last 25 years, he has played throughout Europe, Asia, and North America, sharing the stage with a variety of international artists.

As a label DJ and co-producer with DAT Records, he has garnered a following for his texts and mixes that explore the history of the Goa scene and for his work with the label in releasing groundbreaking compilations with detailed documentation and historical context.

In addition to his work with  DAT, he is also a label DJ and writer with Matsuri Digital while also working behind the scenes with other artists and labels.

Mark brings his training as a pianist and classical music historian to his work with electronic music. An internationally-recognized authority in the history of piano recordings, he has a sense of context about the evolution of musical composition and performance styles that spans centuries of musical history. He has written dozens of liner notes for highly specialized historical piano CDs and articles for magazines, and his research has found him lecturing at university music departments around the world. His training supports his approach to programming sets and key-based mixing (which he’s done since the 90s).

Largely underground for the first portion of his quarter century in the scene, Mark has in the last decade reached a wider audience through his online mixes and streams, Throwback Thursday and Flashback Friday ‘historical’ posts, and his three appearances at the esteemed ZNA Gathering in Portugal, the creme-de-la-creme of retro Goa events.